First Trenitalia, whose new Avanti West Coast rail service starts on Sunday 8 December, has today awarded a contract worth more than £350m to Hitachi Rail to provide and maintain 23 new intercity trains (135 carriages), to be built at its County Durham factory.

First Trenitalia, whose new Avanti West Coast rail service starts on Sunday 8 December, has today awarded a contract worth more than £350m to Hitachi Rail to provide and maintain 23 new intercity trains (135 carriages), to be built at its County Durham factory.

Bringing additional capacity to services along the West Coast Main Line and in North Wales, these new, state of the art intercity trains will start operating in 2022. The trains will be a mix of ten seven-carriage electric trains and 13 five-carriage bi-mode trains, with the ability to switch seamlessly between electric and diesel power. The electric trains will operate between London, the West Midlands and Liverpool while the bi-mode version will serve the London to North Wales route. They will be part of the fleet operated by the new intercity operator, to be known as Avanti West Coast, that begins operation on Sunday 8 December.

These are fast-accelerating 125mph trains which draw from their Japanese bullet train heritage. As a result of their modern design, passengers will enjoy a quieter journey compared to the diesel-only trains they will replace. The new trains will have better and more reliable free Wi-Fi, at-seat wireless inductive charging for electronic devices, plug sockets and USB slots; a brand-new catering offer and a real-time passenger information system that can advise customers of connecting rail services.

There are 453 seats on a 7-car service and 301 seats on a 5-car service increasing compacity compared to the Class 221 Voyager trains they replace (which have 258 seats). The seven-carriage version of the electric trains will have similar numbers of seats to a nine-carriage Pendolino, owing to the longer 26 metre carriages of the Hitachi trains.

The bi-mode trains will run for most of the journey using electric power only, switching to diesel power for those parts of the network that are not electrified – for example, the North Wales Coast Line to/from Holyhead.

Due to the high environmental standards of their diesel engines, the new trains are cleaner and more efficient than the trains they are replacing. Particulate matter emissions are reduced by more than 90% and NOx (nitrogen oxide) emissions are reduced by more than 60% compared to the engines currently in service. The introduction of these new trains will help to support the UK’s drive for a cleaner, greener environment. Bi-mode technology is an important first step in de-carbonising rail and achieving ‘no net emissions’.

By running on electric rather than diesel power for the vast majority of the route is expected to reduce CO2 emissions by around two-thirds across the franchise. Passengers using locations such as Birmingham New Street and Glasgow Central will benefit from cleaner air within the station due to fewer diesel train services.

The new trains will be built at Hitachi’s factory at Newton Aycliffe in north-east England, supporting thousands of jobs across the country. Hitachi Rail prioritises UK suppliers whenever possible, including with servicing and maintenance operations. This approach has resulted in Hitachi Rail spending more than £1.6 billion with UK suppliers since 2013. To date, wheelsets have come from Manchester; windows from Newcastle, door handles from Leeds, and overhead panels from County Durham, amongst many other parts made in Britain.

FirstGroup is introducing new rolling stock to improve our customers’ journeys across all its train companies – Great Western Railway, Hull Trains, South Western Railway and TransPennine Express. Together with today’s announcement, this represents an investment of £1.8bn in more than 1,000 vehicles.

Ernesto Sicilia, Trenitalia UK Managing Director, said: “We are pleased to announce this new fleet which highlights our commitment to innovation and desire to constantly improve our services. We are delighted to provide more efficient and modern trains which are sustainable and environmentally friendly, reducing CO2 emissions by 61%, including new comfortable seats for an improved customer experience.”

The investment in these new trains is being financed through Rock Rail West Coast, a joint venture between Rock Rail and Aberdeen Standard Investments. Rock Rail West Coast will own the trains and lease them to First Trenitalia. As with Rock Rail’s previous new rolling stock deals, debt will be provided by institutional investor organisations (pension funds and insurance companies).

Mark Swindell, Chief Executive Officer, Rock Rail and Director, Rock Rail West Coast, said: “Rock Rail is delighted to be working with First Trenitalia and Hitachi and our institutional investor partners to bring these trains to the region and deliver step changes in the travelling experience for so many rail passengers across the country.

“This new state-of-the-art Hitachi fleet represents Rock Rail and Aberdeen Standard Investments’ fourth new rolling stock deal in the UK, and across all deals combined sees investment by the institutional investor sector of just under £2.5 billion in the UK railway. This long term, highly competitive funding enables significantly enhanced value for money to rail passengers and tax payers over the life of the trains, along with significant improvements in passenger, environmental and operational features.”

Andrew Barr, Group CEO, Hitachi Rail, said: “Based on Japanese bullet train technology, our new trains have proven to be the modern intercity train of choice, increasing passenger satisfaction wherever they run. We’re delighted to continue our excellent relationship with FirstGroup and Trenitalia, for whom we’ve delivered hundreds of trains across Italy and the UK. This new order, which will be built at our factory in the North East, is another vote of confidence in the success of our trains, which are both green and reliable.”

The contract announced today also includes an agreement for aspects of the 23 new trains to be maintained by Hitachi Rail. First Trenitalia have also signed a Maintenance Agreement with Alstom enabling the fleet to be maintained by a joint team from Hitachi and Alstom at the existing Oxley depot in Wolverhampton, supporting highly-skilled engineering jobs.

Both will work in partnership with stakeholders, communities and customers along the route to develop and enhance rail services and help stimulate economic growth. The new partnership will build on the existing success and culture of the current operator by bringing together the best parts of both Virgin Trains and First Trenitalia. Our goal is to “deliver a progressive railway service that generates nationwide prosperity and pride”.

We provide easy and convenient mobility, improving quality of life by connecting people and communities.  Each of our five divisions is a leader in its field: In North America, First Student is the largest provider of home-to-school student transportation with a fleet of 42,500 yellow school buses, First Transit is one of the largest providers of outsourced transit management and contracting services, while Greyhound is the only nationwide operator of scheduled intercity coaches. In the UK, First Bus is one of Britain's largest bus companies with 1.6 million passengers a day, and First Rail is one of the country's largest and most experienced rail operators, carrying 345 million passengers last year. Visit www.firstgroupplc.com  and follow us @firstgroupplc on Twitter.

Trenitalia is Italy’s primary rail operator and one of the leading railway operators in Europe with presence also in France, Germany and Greece. In UK through its subsidiary Trenitalia UK the Group runs c2c franchisee. Trenitalia is the only high-speed operator in the world that faces domestic rail competition while giving exceptional service to its customers and producing revenues of over €5.37bn.  Trenitalia offers two major services: high-speed rail and regional transport. The company is best known for its iconic Frecciarossa high-speed services.

Ferrovie dello Stato Italiane, the ultimate shareholder of Trenitalia, is the main Italian transport company with €58bn of investments in its business plan for 2019-2023. The Group is contributing to the overall investment volume in the country and supporting the development and the improvement of the transport, infrastructure, logistics and tourism sectors. FS Italiane’s operating revenue grew to €12bn in 2018, producing an EBITDA of €2.5bn with a net result of €560m. 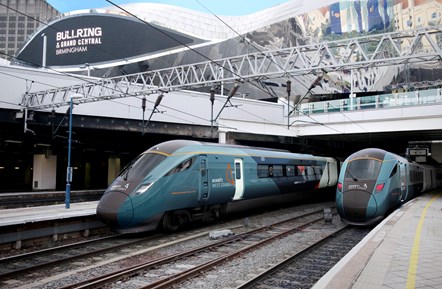