Avanti West Coast and Alstom are offering enthusiasts the chance to get their hands on some eagerly sought after railway artefacts to help raise money for charity.

Two Super Voyager nameplates and a pair of Crewe Station signs are up for grabs, the proceeds of the auction going to the charity Railway Benefit Fund.,

The small Crewe signs, measuring approximately 940mm x 320mm also saw many years use at a station familiar to so many rail travellers.

Alstom is also offering enthusiasts the chance to bid for a midweek guided tour of Central Rivers, with two groups of four people on offer. Proceeds will go toward the charity which supports railway people and their families.

He said: “It was an honour to visit Central Rivers and meet with the teams from Alstom and Avanti West Coast who have kindly donated Voyager nameplates and Crewe signs for us to auction. We are so grateful for their support.

“The money we raise from this auction will allow us to support even more of our railway family and colleagues who are going through tough times. Every seven minutes somebody in rail reaches out to us for help and advice and we need to be there for them.”

Gus Dunster, Executive Director Operations and Safety at Avanti West Coast added: “Modern day railway memorabilia is incredibly popular right now. So we’re keeping our fingers crossed these items will help raise some much needed funds for a charity so close to our hearts.”

Peter Broadley, Managing Director, Services for Alstom said: “The Railway Benefit Fund do such great work to support our people and the wider industry. It’s a pleasure to be involved with a worthwhile cause and I’m sure the auction will be a great success.”

Anyone interested in bidding for one of the signs should email Pete at president@railwaybenefitfund.org.uk , including confirmation of the item they are bidding for together with their details and the amount they wish to bid. The signs are expected to fetch in the region of £150 each. Recent Super Voyager nameplates have fetched between £600 and £900.

The auction closes at midnight on Sunday 24th October. Winning bidders will be notified the following Monday, with all proceeds going to Railway Benefit Fund. Collection will be from Central Rivers (Burton on Trent) or Crewe station at a date to be agreed.

A Pendolino was named after the charity in April 2021 as mark the start of their yearly Railway Family Week. 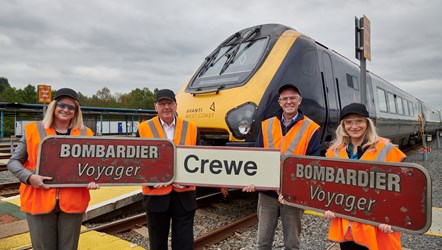 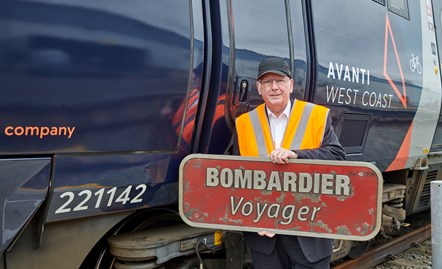