Avanti West Coast has renamed its route through Cumbria to support the search to find the world’s best marmalade.

Sections of the West Coast Main Line between London and Glasgow were named the “West Coast Marmalade Line” to mark a renowned competition that aims to find the tastiest preserve.

It featured drop-off points at selected stations along the route – offering amateur marmalade makers an alternative to posting their prized jars.

The train operator’s efforts to zest up its route is part of its support for the annual World’s Original Marmalade Awards and Festival. The winners of this year’s awards will be announced in May.

Entries travelled on a Pendolino train - known as the “Marmalade Express” for the journey - to Penrith, where they were collected and taken a few miles down the road for judging at Dalemain Mansion - home of the awards and festival.

For every jar submitted, entrants donate £10 towards palliative care charities, including Hospice at Home, who provide care and support to patients, family members and carers affected by life limiting illness in North and East Cumbria.

To date the event, which attracts competitors from around the world, including Australia and Japan, as well as promoting small producers, has raised over £270,000 for hospice care.

Mark Green, Avanti West Coast Station Manager at Penrith, said: “This prestigious event is great for Penrith and Cumbria, which are fondly known as the MarmaLake District when the region welcomes marmalade entries. At the same time, it supports the vital work of Hospice at Home, so we’re delighted to be championing this key event that makes a difference in the communities we serve.

“Entries for this world-famous competition come far and wide and we’re proud to have provided the West Coast Marmalade Line to give entrants an a-peel-ing alternative to posting their jars and ensure potential prize-winning preserves are delivered safely to Penrith.”

Jane Hasell-McCosh, founder of the Dalemain Marmalade Awards, said: “We are delighted that the Marmalade Express has returned for the awards. It is a wonderful opportunity to encourage marmalade makers to enter the competition and it is lovely to think that the jars travel by train, to the home of the MarmaLake District. Dalemain Mansion has strong links with the railway, and it is great to see those links grow with the help of this delicious preserve!”

These quirky awards were founded in 2005 by Jane Hasell-McCosh with the initial idea of preserving, growing and widening one of the most British of customs – making marmalade. They have gone on to generate a following far beyond Jane’s wildest expectations and have humour and a life of their own, inspiring people from all over the world to get involved.

The Awards are centred on Dalemain Mansion; a Georgian stately home lived in by the same family for over 300 years, which also happens to hold a very rich archive of Marmalade recipes. People enter the Marmalade Awards from a wide array of countries including Australia, Japan, Colombia, Senegal, Brazil, the Czech Republic, Canada, India and Singapore. 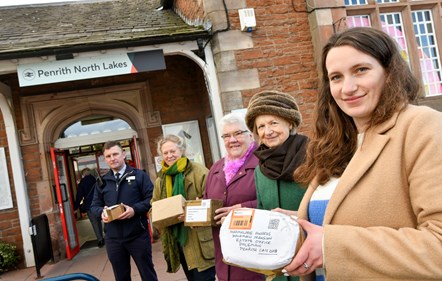