A fully liveried train bearing the franchise’s new branding with its distinctive logo will travel from Euston Station stopping at Coventry, Birmingham International, Stafford, Preston, Crewe, Carlisle and Motherwell before arriving in Glasgow in the early evening.

Before it departs from London Euston, Raffaele Trombetta, the Italian Ambassador to the UK, will name the train ‘Pride and Prosperity’ in recognition of the values the new railway will bring.The Avanti name, (Italian for Let’s Go, and Forward) symbolises progress and movement and the triangular logo represents the three geographic points of the 400-mile long West Coast Main Line that connects London with towns and cities across England, North Wales and Scotland.

FirstGroup and Trenitalia have taken over the franchise from Virgin Trains who ran the service for 22 years. The new partnership brings a package of improvements for customers. The 56 Pendolino trains will be completely refurbished to as new condition, with 25,000 new seats, more reliable Wi-Fi, and power sockets for all passengers. By 2022, there will be 263 extra train services every week to more places and a fleet of new intercity trains introduced to replace the diesel-only Super Voyagers.There’ll also be simplified fares,improved on-board catering and compensation if trains are delayed by 15 minutes.

Steve Montgomery, Managing Director of First Rail said: “We’re delighted to start serving the customers who take 40 million journeys every year on the west coast. We’ll bring families, friends, businesses and communities closer together with new trains and new destinations. We’re excited to get our plans underway and take services to the next level.”

Ernesto Sicilia, Managing Director of Trenitalia (UK) said: “We’re thrilled to begin operating intercity services on the West Coast Main Line, one of the busiest railways in Europe,and to be bringing a host of improvements for the millions of people who use it every year. We’ll also be using our skills and expertise from operating Italy’s high speed rail network to help design and deliver high speed rail services in the UK.”

Both will work in partnership with stakeholders, communities and customers along the route to develop and enhance rail services and help stimulate economic growth. The new partnership will build on the existing success and culture of the current operator by bringing together the best parts of both Virgin Trains and First Trenitalia. Our goal is to “deliver a progressive railway service that generates nationwide prosperity and pride”.

We provide easy and convenient mobility, improving quality of life by connecting people and communities.  Each of our five divisions is a leader in its field: In North America, First Student is the largest provider of home-to-school student transportation with a fleet of 42,500 yellow school buses, First Transit is one of the largest providers of outsourced transit management and contracting services, while Greyhound is the only nationwide operator of scheduled intercity coaches. In the UK, First Bus is one of Britain's largest bus companies with 1.6 million passengers a day, and First Rail is one of the country's largest and most experienced rail operators, carrying 345 million passengers last year. Visit www.firstgroupplc.com  and follow us @firstgroupplc on Twitter.

Trenitalia is Italy’s primary rail operator and one of the leading railway operators in Europe with presence also in France, Germany and Greece. In UK through its subsidiary Trenitalia UK the Group runs c2c franchisee. Trenitalia is the only high-speed operator in the world that faces domestic rail competition while giving exceptional service to its customers and producing revenues of over €5.37bn.  Trenitalia offers two major services: high-speed rail and regional transport. The company is best known for its iconic Frecciarossa high-speed services.

Ferrovie dello Stato Italiane, the ultimate shareholder of Trenitalia, is the main Italian transport company with €58bn of investments in its business plan for 2019-2023. The Group is contributing to the overall investment volume in the country and supporting the development and the improvement of the transport, infrastructure, logistics and tourism sectors. FS Italiane’s operating revenue grew to €12bn in 2018, producing an EBITDA of €2.5bn with a net result of €560m. 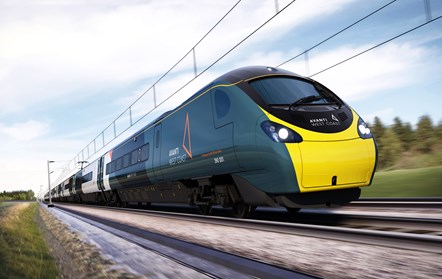